Walking through archaeological sites is an unforgettable experience

Hotels and rooms to let in Athens

The longest pedestrian street (3km long) in Europe is in Athens, created by turning central roads into pedestrian streets (Vassilissis Olgas, D. Aeropagitou, Ap. Pavlou, Hedrian and part of Ermou Str).
It is a unified street that passes through the most remarkable sites in Athens (archaeological grove). The part from Dionisiou Aeropagitou Str. (opposite Hedrian’s Arch) up to the intersection of Ermou Str. and Pireos Str. (Keramikos area) extends a vast archaeological area alienated from the modern city activities. 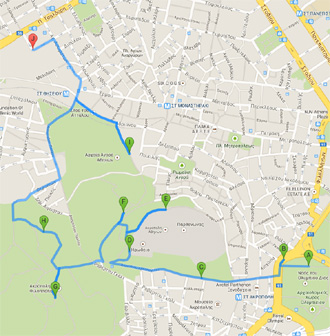 According to the traveler Pausanias, the Temple of Olympian Zeus was built by Deucalion, a mythical ancestor of Greeks. During tyranny period (around 515 B.C.) Peisistratus Junior, grandson of the homonym tyrant, tried to replace the old temple with a new more impressive one. When tyranny was abrogated all construction works stopped. The new temple construction was later given to Roman architect Decimus Cossutius, by the king of Syria Adiochos Epifanis the 4th. When Adiochos died (163 B.C.) the temple was once more abandoned and left without roof or gables. The temple’s construction, one of the largest of ancient world, was finished in 131 B.C. by the Roman Emperor Hedrian.

Ilissos River bed. Take a walk to the only preserved part of Ilissos River basin (behind Olympion), also called sacred Muses River, to see the studded ruins of ancient temples. In a nearby location stands the famous rock of Kalliroi Spring and next to it is Aghia Fotini church built in 1872 on the ruins of an older church and on the foundations of Ekati’s sanctuary. Remarkable monuments of classic Roman and Byzantine periods (Delphinios Apollonas Temple, Kronos and Rea Temple, a Byzantine district with workshops, Leonidis basilica, etc) are preserved in a nearby area.

After constructing Zeus Temple, Athenians honored Hedrian by building (in 131 B.C.) an arched gate on the north-western corner of the temple’s fencing. The arch’s epistyle carved from Penteli marble bears two inscriptions. The first one facing Acropolis and the old town (west side) says: "This is Athens, city of Thiseas”. The second one facing the sanctuary and the city from Hedrian’s side (east side) says: “This is the Hedrian’s city and not Thiseas”.


DIONISIOU AEROPAGITOU Str.
One of the most impressive streets in Athens with an amazing view of Acropolis and Parthenon. Pay attention to the buildings on the street’s left side. Most of them were built at the end of 19th century and beginning of 20th century and are of neoclassic or modernistic type representing the area’s elegance.

Cross the gate leading to the archaeological sites (on the south aisle of Acropolis), walk Dionysiou Aeropagitou Street and go straight up. Higher on your right you will see the most ancient of all famous theaters in the world, Dionysus ancient theater. Aeschylus, Aristophanes, Euripides and Sophocles, four of the most famous ancient Greek poets, watched their plays being performed for the first time (5th century B.C.) in this theater. The theater bench rows and stage were first built from wood. During the 4th century B.C. the theater was rebuild in stone. Nowadays, the only preserved parts are those of the stone bench rows. According to experts, the theater had 17.000 seats capacity. The choragic Thrassilos Monument (319 B.C.) stands above the theater, carved in Acropolis rock and a little higher you can see two choragic Corinthian columns.

Continuing your walk you will reach Eumenis Stoa, which was built in the 2nd century by the King of Pergamos, Eumenis II. Its main purpose was to protect the audience from sun or bad weather. Above Stoa you can see the ruins of Asklipios which was built after the famine in 429 B.C. that decimated Athens population.

Herodion, as it is called today, was built in 161 B.C. by Tiberius Claudius Herod Atticus, renowned personality, teacher and philosopher who inherited his father’s wealth. Herod Atticus built this roofed Odeon for music concerts in honor of his wife Regilla, after her death. The Ancient Greeks used to organize musical events in this venue. Nowadays, every summer Athens Festival events take place in this theater that can host up to 5,000 spectators . Its magic and beauty, however, can only be understood when walking on the way to Acropolis.

Το σύμβολο της Αθήνας, ο ιερός βράχος, ο σύνδεσμος ανάμεσα στο θαυμαστό αρχαίο πολιτισμό και το σύγχρονο. Τα μνημεία που It is the Athens symbol, the sacred rock, the connection between ancient and contemporary civilizations. The monuments that stand today on the Sacred Rock are dated from the prehistoric period up to the ancient times. There is not even one person (Greek or foreign visitor) that does not want to pay due honor to this sacred rock and see its beauty and glory. A visit to the sacred rock of the Acropolis and the Acropolis Museum is an unforgettable experience.

It is the most ancient court in the world and was specifically respected place during the ancient times. The first aristocratic Parliament of ancient Athens was located here. Throughout the time this parliament lost its political power and since the second half of the 5th century B.C. it had only judicial power mainly focusing on homicide cases. As described in “Oresteia” this was the court where Orestis went on trial for murdering his mother Clytemnestra and her lover Aegisthos. As the bronze plate on the rock base informs us this was also the place where Athenians first heard Apostle Pavlos preaching in 52 A.D.

You can visit it every season of the year and still find it beautiful. A walk there is an amazing experience: A beautiful lush green area that includes remarkable monuments such as what is considered to be the “Socrates Prison”, “Kimoneia Graves”, ancient Koili Street, a commercial avenue full of houses and shops, “Mouseos War Memorial”, Filopappos Monument and a great view of Parthenon and Acropolis.

Pnika is located between Muses Hill, where Filopappos Monument stands, and Nymphs Hill with the homonym sanctuary, where today's National Observatory is located. This semi-circular square was the gathering place of all Athenians (6th century B.C.) to hear famous rhetoricians, who delivered their speech from stone podium in the center of Pnika. They also came here to exercise their democratic political duties. It is believed that it could host 10.000 people.


I. ANCIENT AGORA (Market) OF ATHENS

Ancient Agora's archeological site is located on the foot of Acropolis Rock close to “Theseion” metro station. In antiquity, Agora was not only a commercial center but a political, cultural and religious one as well. This area included administrative buildings, temples, public services and courts. Athenians gathered here to buy and sell products, to get informed on current affairs, criticize the government, exchange ideas or just start a conversation. The area’s history begins from the Neolithic era but its monuments are of different historic periods: from classical times until the 11th century A.D. An example of the latter period is Aghioi Apostoloi church.

It is a unified architectural complex constructed between 19-11 B.C. consisted of a large rectangular yard surrounded by columns, while its porches housed many different shops. North of the complex there was a library (a rectangular building with size 122x82 m), which was built in 132 A.D. by Adrianus.

Ancient Kerameikos was located in the northwest edge of Athens and extended inside as well as outside the walls of the city, which nowadays cross the archeological site. In the center of the archeological site are the two most famous gates of ancient Athens, Dipylon and Iera Pili.
The area around these gates was the biggest and most ancient cemetery in Attica. It was also the burial place of citizens honored by the city of Athens. According to traveler Pausanias the area took its name from Keramos. Probably, though, it took its name from ceramics district (Kerameikos: the person that deals with ceramic art or pottery), which was created on the Heridanos River banks. The river bed is visible in the archeological site. Kerameikos ancient municipality included an area much larger of the one found during excavations. It is believed that it extended from the northwest boarders of Agora to the grove that took its name from the hero Akadimus.

Panathenaea Celebration. Every year ancient Athenians celebrated Mikra Panathenaea and every four years Megala Panathenaea. These were grandiose cultural events that included horse races, sports games, music and other art competitions.
In the last day of the celebration a procession was starting from Kerameikos and passing through Agora ended up on Acropolis, where people offered to Athena the so called mantle.
In ancient times, statues were covered with real clothing. Therefore, gods' mantle was actually a woolen tunic, knitted by the priestess and the young virgins who assisted her. It was placed as a sail on a large wooded boat's mast and was transferred in Acropolis. The whole procession followed this boat. This is the procession that Parthenon frieze depicts.

This area was inhabited from prehistoric times and took its name from hero Akademos or Ekademos. During the 6th century one of the three famous Gymnasiums in Athens was built in this area. Nowadays, however, the area is famous because of the well known Philosophy School, which was established in 387 B.C. by Plato and flourished during the time of Neo-Platonists.

Source: GNTO
Accommodation
For your stay in Athens, you can book a room in one of the hotels and Bed & Breakfast inns.
Close to Athens, as well as in many other areas, there are hotels and accommodations of various categories and types (rooms to let, residences, Bed & Breakfast inns, studios, hostels, guesthouses and furnished apartments) that can satisfy every visitor's demands and needs for a pleasant and enjoyable stay.
You will find wonderful hotels, rooms and apartments to let of all categories and price ranges.


Access - Tranportation
By car:
Access to Athens through the existing road network in Attica is quick and easy, Syngrou ave (by south suburbs), Piraeus ave (by Piraeus' areas), Mesogion Ave (by north suburbs, east Attica, Kiffisias (by north suburbs), Lenorman (by west suburbs) and Acharnon (by the National highway and north suburbs).
Access from all the other parts of Greece is through Athens - Thessaloniki and Athens - Patra National road networks and from the islands through Piraeus, Rafina and Lavrio ports.

For your convenience, you can use the route map on the field "Routes" with information about the mileage, the time you need and the route you will follow, selecting the points of interest.

For your stay in Athens, you can book a room in one of the hotels and Bed & Breakfast inns. In the town of Athens, as w...

Embassies and Consulates in Athens

List with addresses and telephones from all the embassies and consulates in Athens Access map. How to go to the embass...

By car:
You should be very careful while driving in the center of Athens and in the areas that there are bus lanes. The best way to reach the town center is to use the public transportation.
Information about the road traffic
The main roads connecting Attica to other main cities of Greece are:

The new Attiki Odos connects Athens to Elefsina and the airport Eleftherios Venizelos. Attiki Odos, also, encloses Athens and provides 27 main and secondary entrance / exit hubs from the capital. In Attiki Odos all vehicles pay a toll, depending on category.
Information: www.aodos.gr