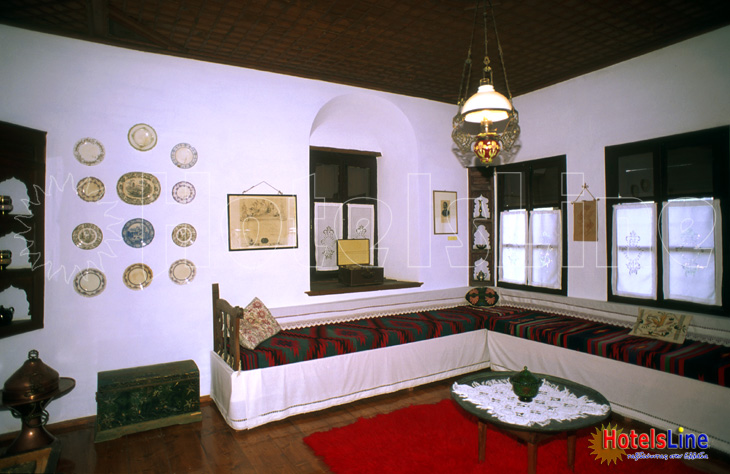 The Museum of Folk Art and History of Pelion is housed in Topali Mansion, built in 1844 according to the date that is etched in a stone relief above the entrance.
It is a three-storey mansion, a representative sample of Pelion classical architecture, as this stood at the end of the first half of the last century. It is a stone building for its most part, except for the southern section of the roof that is made by mortar.

Its roof is wooden and hipped with slates from the region, which extends circumferentially and thereby it protects the sensitive walls of clay.
It has a strongly fortified character with many battle holes and a defense turret on the roof, the armored entrance with the heavy protective crossbars, its secret crypts and only some small windows with crossbars on the ground floor, which are gradually multiply reaching to above floors.
In 1932, this mansion was donated to Community of Makrinitsa by Topali family, so to house the Museum of Folk Art and History of Pelion. The first repair was made in 1957, and attempts were made to make it functional in the ‘60s.
In 1985, it was declared by the Ministry of Culture as a historic monument. Then, in 1994, follows the preparation of the study repair and restoration by the 5th Conservancy of Modern Monuments.

The traditional hotel  "Damouchari" is found at the coastal Damouchari, an area where the calm and t...

758
The folklore collection includes a number of exhibits that currently exceeds 1500 items from the 311 that were initially, including a series of murals of folk painting from 18th and 19th centuries from the area of Pelion, a rich collection of old photographs of the early 1900, household equipment of bronze, wood and porcelain, distilling equipment for raki, pictures, engravings and small objects of religious art, traditional costumes of Pelion, historical relics of Makrinitsa, like the banner of the Revolution of 1878, the equipment of spinning and weaving art, woolen textiles, traditional carpets.

In 1998, it included in its collection a series of folk art paintings by N. Christopoulos from Volos, an offer by EOT to the museum.
The main objective of the folklore exhibition was and is the Mansion not to lose the warm character of the house, while, by a contemporary museum idea, to expose the collections in a way that promotes and highlight the folk culture of the region.

For your stay in Magnesia, you can book a room in one of the hotels and Bed & Breakfast inns. In Volos town, as well as...

You can access Magnesia by car through the road network. The best way to explore the area is to have your own car and i...