Archaeological Museum in Lefkada
The Lefkada Archaeological Museum: is housed in the cultural center of the Borough of Lefkada (A. Sikelianou & N. Svoronou street). The findings exhibited cover a period of time, beginning in the middle of the Paleolithic times (200.000 - 35.000 π.Χ.) and reaching the later Roman times.

Hotels and rooms to let in Lefkada island

In a separate room in the museum, the findings of German archaeologist Willhelm Dairpfeld are exhibited. He is the one who developed the theory that Lefkada is Homer’s Ithaca.
The museum exhibits tools, ceramic and copper jewellery and gems of ancient tombs, mostly from the Ancient city of Nirikos, Nydri, Hoirospilia, Evgiros and the cave in Fryni. 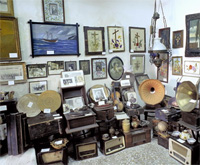 In newly constructed two story building located in the grounds of the Holy Convent, specially designed rooms are going to host a variety of objects of ecclesiastic art. The main bulk of the exhibits comprise of paintings of Eptanese and Lefkadite artists, mainly post Byzantine portable icons and parts of chancel screens (magisterial icons, epistyles, door panels).

Of great interest are the different ecclesiastical manuscripts and old prints from the convents library, with rare publications by Greek and foreign printers of the pro revolution and revolution years. Significant are the silver works exhibited, mainly crosses, grails, candelabra, trays and icon frames and gospel covers.
Finally a variety of canonicals and elements of pontifical uniforms dated from the 18th and 19th century.

Kontomichio Folkrorik Museum of the Sfakiotes
The Kontomichio Folkrorik Museum of the Sfakiotes in Kavalos village. It was created by the ex Borough  of Sfakiotes and is open to the public since the summer of 2004. It is housed in the old building of the Kavalos elementary school, in a place full of pine trees.
The museum refers to tools and equipment, their use and meaning to the social evolution during the time they were created and the social and economic framework in which the Lefkadite people worked during the pro industrial times. The museum’s exhibits are:

Kochili Rooms, are located at the city of Lefkada, which is the capital of the island.They are locat...

In a green environment, on the ground floor of a building, where the top floor is a house, there are...

8336
Accommodation
For your stay in Lefkada, you can book a room in one of the hotels and Bed & Breakfast inns.
In the town of Lefkada, as well as in many other areas of the island, there are hotels and accommodations of various categories and types (rooms to let, residences, Bed & Breakfast inns, studios, hostels, guesthouses and furnished apartments) that can satisfy every visitor's demands and needs for a pleasant and enjoyable stay.
You will find wonderful hotels, rooms and apartments to let of all categories and price ranges.

For your convenience, you can use the route map on the field "Routes" with information about the mileage, the time you need and the route you will follow, selecting the points of interest.

For your stay in Lefkada, you can book a room in one of the hotels and Bed & Breakfast inns. In Lefkada town, as well a...

Lefkada is the only island where you can come by car using the bridge that connects Lefkada with Aetoloakarnania. The be...

By car:
Lefkada is the only island where you can come by car using the bridge that connects Lefkada with Aetoloakarnania.
The best way to explore the island is to have your own car. You reach most places of the island through the road network.
In Lefkada there are many car rentar businesses.

Moving around within Lefkada is made possible by using the bus from Lefkada, with regular routes between areas.

For more information regarding distances and time you may refer to the "Routes" table in the main part of the webpage.