The island of Euboea, with its rare natural beauty and all-year round hospitality, will attract the visitor’s attention. Euboea is an island opposite the eastern coast of Attica and Boeotia and its capital is the charming city of Halkida.

Halkida is the island's capital, an administrative, commercial, industrial and cultural center. It is linked to the Boeotian coast with a drawbridge and the new suspension bridge. The city is known for many famous people of literature and arts.
Worth visiting in the city:


It is also worthwhile to get to know up close the interwar period, by visiting the refugee settlement in Neapoli. In the area of "Kamares" the Roman aqueduct is located. The castle of Karababa is situated on a hill at the Boeotian shore (Fourka), in a strategic location.
You can swim at "Asteria" beach, at the beaches of Kourenti, Souvala, Liani Ammos, Rodies, Papathanasiou Coast and at the beaches of Agios Minas and Alykes.

Agii Apostoli is a coastal village close to Aliveri. You can swim at the beaches of the area. On June 29th the festival of the Holy Apostles takes place.

Aliveri dominates with its unique color, the industrial area and the prehistoric sites.
In Aliveri, you can visit:

You can swim at: Cabos, Rifi, Agii Apostoli and Kalamos.

Amarinthos is also a busy resort from where you can visit the beautiful villages of Kallithea, Gymno and Setta.
The traditional village of Ano Vathia is built along a creek, while Avlonari, a village mostly of stone-houses, is amphitheatrically built with a Venetian tower at its highest point. Visit Vrisi in a lush area full of plane and walnut trees. You can also visit Kremastos village on the south of Vrisi and after that the village of Gaia, going on an impressive journey through the lush vegetation. Outside the village is the monastery of Panagia of Klivanos. In the coastal tourist village of Vathi of Avlida, you can visit the archaeological site of Avlida.

The 7SYN7 is a fully equipped studios complex composed with autonomous villas. In the 7SYN7 you will...

7077
Vasiliko, Fylla and Lefkandi are scattered villages in the most fertile and historic valley of Euboea, the Lilantio field.
It is worth visiting:

Eretria, built on top of the ancient city, connects the island of Euboea with Attica and forms a natural harbor. The jewel of Eretria is Pezonisi, full of pine trees, where you can find tourist facilities. There is a bridge that connects it with the mainland.
In Eretria it is worthwhile visiting:

You can swim: at the town’s beach or at the beaches towards Malakonta, Magoula and Amarynthos.

Kimi has wonderful views to the sea. The beach of Kimi is a port and tourist resort and connects the island to Skyros. In Kimi you can also find Chili, a resort on a scenic coast, as well as Choneytiko with drinkable, mineral water from natural springs.
With panoramic views to the southern Euboean gulf is the coastal village of Malakontas.
Nea Artaki is famous for its nightclubs and restaurants.
One of the ancient settlements of Euboea is Politika with the pine forest of Prophet Elijah above the monastery of the Virgin Mary. On a hill overlooking the sea is the village of Nerotrivia and the nearby coastal village of Daphne. 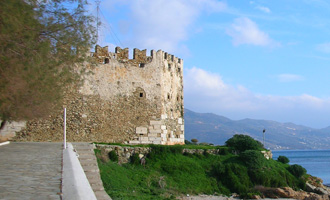 The traditional settlement of Panagia in Almyropotamos, is a gathering place for holidaymakers. The name of the village is due to its saltwater stream, an unexplained phenomenon.
You can swim: at the Virgin Mary beach, at Agios Demetrios and at the beach of Zaraki.

One of the most beautiful and historical cities in Euboea is Karystos, which is laid in a natural harbor that connects it with the port of Rafina. The seas of Karystos, with their warm and shallow waters, are ideal for children and frail people.
It is worth visiting:

Marmari attracts many tourists thanks to its beautiful beaches, clear waters and available fishing areas. Nearby you can see Petalii, a group of islands belonging to Empirikos family, consisting of ten islets and skerries covered with pine, almond and olive trees as well as vineyards.
You can also visit: the Kroimadi spring with running water and lush vegetation.

Nea Styra is built among the green hills. Impressive is the "Pias" site with plane trees, the village of Zoodohos Pigi with running waters and trees and the canyon of Charakas, ideal for hiking.
You can swim: at the village beach or at the beaches of Kefalas, Aria and Dilisos.

Styra is an ideal place for hikers and nature-lovers. It is well-known since ancient times for its marble quarries. 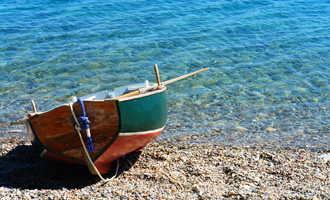 Agia Anna is inhabited since historical times and is amphitheatrically built on an area filled with pines.
You should visit: the church of Agia Anna.
Within walking distance of Agia Anna is Agali, one of the most beautiful beaches in Euboea. One of the traditions of Agia Anna is "Piperia", an ancient custom on May 1st.
At the coastal village of Agiokampos the Forest is located, in the site of "Valanti" in Telethrio, with oak and arbutus trees and natural spring water.
Edipsos - Loutra is famous since antiquity for its hot springs. Today, Edipsos features modern hydrotherapy facilities and a remarkable tourist infrastructure.
It is worth visiting:

A gathering place for many tourists during the summer months is the traditional village of Vasilika.
From there you can visit the village of Tsapournia with its traditional houses, in an area full of pine trees.
You can swim: in Psaropouli.

Loutra area of the traditional village of Yialtra is known since antiquity for its hot springs.
Gouves is a charming village surrounded by pine trees
A commercial center in northern Greece is Istiea, with its old stone-built houses.
There you can visit:

One of the most beautiful cities of Euboea is the natural harbor of Limni. Limni is adorned with beautiful beaches, clean, calm waters, and lush vegetation. In this area the historic monastery of Agios Nikolaos is also located.
You can swim: at the beaches of Limni, Kochili, Katounia, Galataki and Irakli.

Lihada is a fishing village with houses built among pine trees. Nearby is the island of Agios Georgios.
You should visit:

Mandoudi is built in an extremely gifted by nature area.
Neos Pirgos is ideal for strolling and relaxing. The beach of Neos Pirgos forms a horseshoe with Orei village - a refuge for fishermen.
Pefki, the port of Artemision, is a bustling tourist center, with pine trees that reach the sea.
The traditional houses in Artemision deserve your attention. On the hills of Rodi Mount, above Artemision, at "Agrilitsa" site, the views are spectacular and, most of the time, the Athos Peninsula is visible.
Among plane trees, crops and pine forests, built in the fertile valley of Kirea River, is Prokopi. In a walk through the pine trees you will find the villages of Pili and Vlachia.
Among the trees lies one of the most beautiful seaside villages of Euboea, Rovies.
There, you can visit:

Orei is a bustling tourist resort, where you can swim at its sandy beach.

For your stay in Euboea, you can book a room in one of the hotels and Bed & Breakfast inns. In Chalkida as well as in m...

You can access Euboea by car using the road network. The best way to explore the area is to have your own car and is wo...

Accommodation offers in the area of: Evia - Euboea

Accommodation offers in the are of Evia - Euboea for afordable vacations in hotels, rooms to let, geusthouses, apartments etc...

By car:
You can access Euboea by car using the road network.
The best way to explore the area is to have your own car and is worth visiting places that are not accesible by the local public transport and tours.

By bus (KTEL):
There are regular bus routes for Euboea from Athens to Halkidiki and from Halkidiki to all Euboea regions.