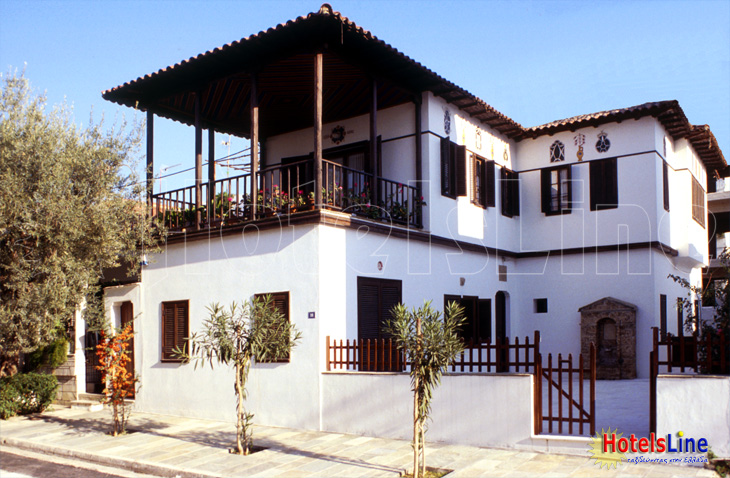 The "Kitsos Makris Folklore Centre" is located at the home of the folklorist situated in Anavros in Volos, at Kitsos Makris Street, 38. It includes his folklore collection, his library, consisting of 4,000 volumes of books and his archive, with 2,500 slides and 4,000 photographs, many of which illustrate treasures of folk tradition that have not survive today.

After his death in 1988 and according to his own wish, all the above donated by his family, along with the house that hosts them, to the Supreme Cultural Foundation of our region, the “University of Thessaly", in order the "Folklore Center of Kitsos Makris" to act as Folk Museum and Research Center.

The house of Kitsos Makris was built in 1955 by the architect Argyris Filippidis from Volos. It is a two-storey house of an area of 180 sq. m. It is a characteristic house inspired by the traditional architecture of Pelion, in which the traditional morphological used elements have been remodeled and fit perfectly with the contemporary creation, without the sterile form of copying homes in the later years.

He follows very consistently the paths of the great Greek architect Dimitris Pikionis during the period between the wars, who along with Angeliki Hatzimichali in Folklore, Aristotelis Zachos, the painter Fotis Kontoglou and many others, created the movement "Back Roots", the principles of which were embraced by some younger architects, including Argyris Filippidis.

The ground floor includes the area of the folklore collection, the office, the kitchen, which was recently converted into an office, the dining area and the living room, while on the first floor there are three bedrooms and restrooms. The spaces of the house really give the "stigma" of Kitsos Makris.

It is his place of expression and creation. Some of the rooms were decorated by him with frescoes, mosaics and paintings on the ceiling, with the most interesting to be the great "friza" in living room which, as he mentions: “This painting represents Volos and Pelion not like the eyes seeing them, but as Kitsos Makris has them in his heart, which was created in the spring of 1959. He was not striven to faithfully describe it. He wanted to sing..."

The folklore collection includes about 560 folk art objects that come mainly from the area of Pelion, dating from the 18th and 19th century.

Some of them can be regarded as unique in their kind for the region, such as the large mural by Pagonis, dating in 1832 and was the main theme of painting of the small house of Triantafyllos manor in Drakia, Pelion, which depicts cities and villages of Greece, such as Chalkida, Talanti, Douko and others.

This fresco is the masterpiece of painted decoration of secular architecture of Pelion. It is the only saved example in the area from the tens of meters painted surface that existed before, thanks to the passion and the tireless efforts of Kitsos Makris.

Next are the frescoes of Athanasios Pagonis, son of the previous, which come from his family home in Drakia, dated around 1870 and depict landscapes of the Thessalian plain, and one of the most important folk portraits of the benefactor Rigas Feraios, his own work.

Among the most important exhibits of the collection are also 25 works by the painter Theophilos Chatzimichail, who lived in the region of Magnesia from the end of the last century till 1927, when he left permanently for his homeland, Mytilene.
Kitsos Makris, who was one of the first scholars of Theophilos since 1939, he started the rescue and protection of his creations and this collection includes some of his most important works, such as "The Three Friends Chieftains" (1898), "The Honeymooners" - which represents Gerampini couple (1919), the "Robert and Julia" (1899), the “Greeting of May" (1919), “Otto’s disembarkation” - painting on a navy bag, the “East - Ali Pasha in the lake of Ioannina" - painting on a cloth.
Also, it includes some images with the most notable: "Madonna and Child" and many fragments of wall paintings, all come from the region of Pelion and give us a complete picture of the painter’s work in Magnesia.

Also important is the collection of paper images, which were printed by copper matrices (etchings) at Athos Mount, and then, the monks were using them in their various tours. The collection with the engravings includes two flanking matrices that are the only survived in the region.

Nicholas Christopoulos (1880 - 1967), the last folk painter of this region, holds his place in the collection with 16 works that depict his characteristic ships, mermaids and other nautical themes mainly.
Finally, the folklore collection is filled with post-Byzantine icons and small objects such as carvings and representative samples of religious art. With various everyday objects (spoons, distaffs, crooks) and silversmith (necklaces, brooches, bracelets, belts, wedding crowns, amulets), all crafted using traditional techniques such as engraving, forged, cast, openwork, filigree and niello technique.

Also, there are various bronze objects, pottery dishes and utensils, musical instruments, lithographs, embroidery and a host of other items that cover the entire spectrum of folk art.

The decoration of the house is filled with works by famous painters such as Geskos, Malamos, Theologos, and works of the engraver Tassos and the ceramist Panos Valsamakis.

In 1996, the University of Thessaly assigns the re-opening of the folklore collection and of the other objects in a working group, consisting of the sculptor and conservator Dimitris Zacharias, the architect Dimitris Paliouras and the painter and conservator John Papaioannou, who, together with his daughter, folklorist Mrs. Thalia Makris Skotiniotis, organized the exhibition in the ground floor and the staircase.

The main objective of the working group was to maintain the warm atmosphere of the house and the character given by Kitsos Makris, alongside a modern museum idea, to expose the collection in a way that promotes the popular culture of our region. The items categorized into themes, which are easily understood by the visitors and at the same time provide the knowledge of the progress and evolution of our folk art.
Thus, in the place of folklore collection, in the highest band are placed the frescoes by Pagonis, Athanasios Pagonis and a mural by an unknown painter from Abelakia (1790), so to be as close as possible to their original natural height, while among them have been inserted two elaborate polychrome plaster of skylights of 18th century in order to separate the different subjects.

In the middle zone are placed the works of Theophilos, the "Rigas Pheraios" by A. Pagonis, wood carvings, pictures and an addition of jewelry, while the windows of the room sealed and stood in displays, in which are exposed the silver wreaths, bronze objects, musical instruments, "Kokones" of dough, church carvings and other small items.

Finally, in the lower zone are placed on both sides displays, in which are exposed for security reasons all items of silver jewelry of daily use, wood carvings and various small objects into thematic sections, while at the third side are exposed painted carved chests, bronze and ceramic objects and the collection of wood-carved walking sticks.

The office space, small but full of books, photos and memorabilia, was the favorite place of work and creation of the great folklorist, so it was chosen to maintain the style and the character he had given himself Kitsos Makris to his "own" space. The only intervention was the placement of the painting of Theophilos "East - Ali Pasha in the lake of Ioannina" over the windows.

In the space of the vestibule is exposed the collection of the ceramic plates, engravings and two informational texts by Kitsos Makris for Theophilos and Pagonis. On the wall of the stairwell have been placed the works of Nicholas Christopoulos, while on the floor of the same space the etchings, the copper mold, the naval bag with "Otto’s disembarkation» by Theophilos and the image with “Averof Battleship”.

The dining and living room have the form of a Pilioritian "Doxato" with the carved arches and the built in, masterly, carved ceilings of the 18th century (from Bantis’s house in Drakeia that has demolished). There is also the showcase with the personal belongings of Kitsos Makris, images from his life, his writings and the honorary distinctions. The other walls are decorated with the works of Modern Greek artists.

Kitsos Makris’s desire and the commendable decision of his family to donate the rich collection of folk art, the library and his archive along with the house to the University of Thessaly, covers a wide gap of the city of Volos in the section of our cultural heritage. “Kitsos Makris Folklore Centre" with the rich material, will attract younger scholars of our folk art who will further investigate our popular culture and will continue working on his vision.