At the Archaeological Museum of Naxos, artworks and everyday objects are exhibited, which came to light by the excavations that were conducted on the island since the Second World War, and are dating from the later Neolithic to the Old-Christian years (5300 BC - 5th century A.D.)

Hotels and rooms to let in Naxos island

Naxos is the largest and the most important island of Cyclades island complex, a rich place with the appropriate environmental factors for the agriculture and livestock growth. It is also an island with easy mooring, a fact which helped especially to its strong and continuing cultural presence in the Greek land from the late fourth millennium BC until now.

The first heyday of Naxos was during the First-Cycladic II era (2700-2300 BC) during which Naxos and the surrounding small islands were developing into a major commercial and cultural centers of that era. During the subsequent periods of the Bronze Age, several changes and upheavals in the Aegean area had been occurred resulting in the emerging of new centers in other islands (Santorini, Milos, Paros) and Naxos was losing its dominant position in Aegean Sea.

The excavations, the last 40 years, have brought to light numerous archaeological sites (Grotta, Aplomata, Plithos, Melanes, Sagri, Iria, Tsikalario in central Naxos, Panormos, Korfi of Aroni in eastern Naxos) as well as numerous finds which are housed in Naxos Museum.

Among the archaeological collections of the Museum of Naxos there are important findings, especially of the First-Cycladic period (3200 - 2300 BC) and also from the earlier phases of the historical years, and many of them are unique. 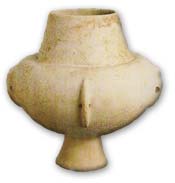 Also, unique is the collection, after the one of the National Archaeological Museum, of the First-Cycladic marble figurines, and the rich Mycenaean pottery collections (late of the second millennium BC) and the Geometric period collections (9th-8th century BC).

The Archaic (7th-6th century BC.), the Classic (5th-4th century BC.) and the Hellenistic (3rd-1st century BC.) periods are represented by distinctive pottery and clay figurines. From the Roman period (1st BC - 2nd century AD), besides pottery, there are also another large and very interesting collection of glass vases.

The archaic sculpture is represented by a few major sculptures.

The Halcyon Villas is a brand new luxury boutique hotel built on a superb hillside with panoramic mo...

827
The Building
The building of the Archaeological Museum has been preached as a historical monument, built in the period from 1600 to 1800 and is an impressive example of the architecture, which was developed in Naxos in its heyday during the Frankish period.

It is a five-storey building, which was built in the path of the Frankish walls, and includes two of its towers. It was intended for housing a Jesuit school, founded in the 17th century, and ended up at the late of the 19th century - early of 20th century to be the building of the famous commercial school, and among its students was N. Kazantzakis.

Admire the roof of the museum, the unique mosaic floor that was found in a house of the 3rd century BC and which is depicting a half-naked female figure riding a sea monster.

The building was given to the Archaeological Association and was used to house the museum since 1973.

Accommodation
For your stay in Naxos, you can book a room in one of the hotels and Bed & Breakfast inns.
In the town of Naxos, as well as in many other areas of the island, there are hotels and accommodations of various categories and types (rooms to let, residences, Bed & Breakfast inns, studios, hostels, guesthouses and furnished apartments) that can satisfy every visitor's demands and needs for a pleasant and enjoyable stay.
You will find wonderful hotels, rooms and apartments to let of all categories and price ranges.


Access
Naxos island is linked by ferry routes to Piraeus,

The route Piraeus - Naxos (103 m distance) varies depending on the ship stops at intermediate ports.
Daily ferry routes connect Naxos to the rest Cyclades Islands.
High Speed vessels connecting Naxos to many of Cyclades Islands and the Port of Piraeus, reduce significantly the duration of the trip.
See details for   Access, Useful information, Transportation

For your stay in Naxos island, you can book a room in one of the hotels and Bed & Breakfast inns. In Naxos town (Chora)...

The best way to explore the area is to have your own car and is worth visiting places that are not accesible by the loca...

By ferryboat:
Naxos island is linked by ferry routes to Piraeus,